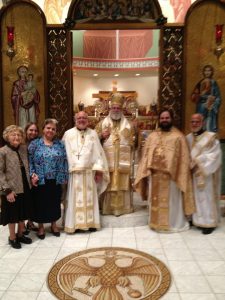 The Reverend Protopresbyter Christopher H. Bender, Dean of St. Nicholas Greek Orthodox Cathedral, is a graduate of Yale University (B.A., 1976) and Holy Cross Greek Orthodox School of Theology in Brookline, MA (M.Div., 1981). After his ordination to the priesthood in 1984, he served parishes in Lowell, MA, East Pittsburgh, PA, Morgantown, WV, and, most recently, Aliquippa, PA.

A strong advocate for the ecumenical movement, he has represented his national church in the areas of environmental ministry and social justice and advocacy at the National Council of Churches of Christ in the U.S.A. since 1997.

He is currently serving as chair of the N.C.C. Justice and Advocacy Commission. He also chairs the Orthodox Fellowship of the Transfiguration, a national ministry which offers leadership in the area of creation care.
In August, 2013, Fr. Christopher was appointed Hierarchical Vicar of the Central Region of the Metropolis of Pittsburgh by His Eminence Metropolitan Savas. He is also Secretary of the Spiritual Court for his region.

Fr. Bender is married to Dr. Filitsa Hatizivasiliou Bender of Thessaloniki, Greece, a nephrologist on the faculty of the University of Pittsburgh Medical School. They have two daughters, Sophia & Maria.

We use cookies on our website to give you the most relevant experience by remembering your preferences and repeat visits. By clicking “Accept All”, you consent to the use of ALL the cookies. However, you may visit "Cookie Settings" to provide a controlled consent.
Cookie SettingsAccept All
Manage consent

This website uses cookies to improve your experience while you navigate through the website. Out of these, the cookies that are categorized as necessary are stored on your browser as they are essential for the working of basic functionalities of the website. We also use third-party cookies that help us analyze and understand how you use this website. These cookies will be stored in your browser only with your consent. You also have the option to opt-out of these cookies. But opting out of some of these cookies may affect your browsing experience.
Necessary Always Enabled
Necessary cookies are absolutely essential for the website to function properly. This category only includes cookies that ensures basic functionalities and security features of the website. These cookies do not store any personal information.
Non-necessary
Any cookies that may not be particularly necessary for the website to function and is used specifically to collect user personal data via analytics, ads, other embedded contents are termed as non-necessary cookies. It is mandatory to procure user consent prior to running these cookies on your website.
SAVE & ACCEPT